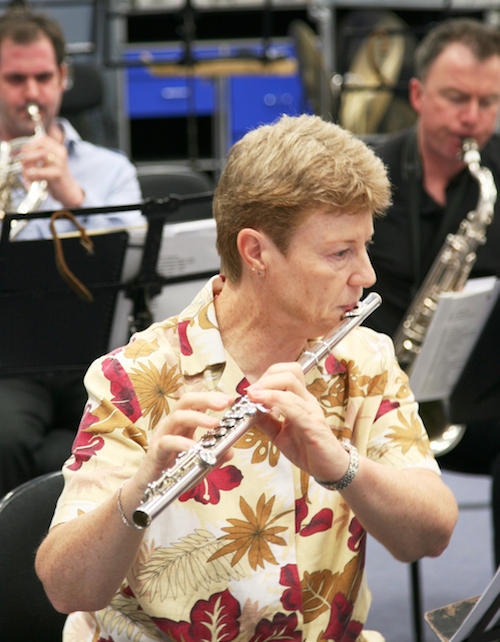 Cathy began learning the piano as a child and has pursued her passion for the flute for the last 34 years!  Over this time she has played in many community concert bands and orchestras, including the Hornsby Concert Band, Lane Cove Concert Band, Blue Mountains Musical Society and Strathfield Symphony Orchestra.

Following a period as a full time flute and piccolo player in the Royal Australian Air Force Band, Cathy established a private music teaching studio at her home in Castle Hill, in the north-western suburbs of Sydney, combining this with teaching in local schools.  In the past Cathy has also run classes for adult beginner flute students in evening colleges.

For the last ten years Cathy has been a flute and piccolo player in the Royal Australian Navy Band, and has performed with the Band at international military tattoos in Brunei, the United Arab Emirates and China - and in 2012 at the prestigious Royal Edinburgh Military Tattoo in Scotland.  Cathy has also travelled to Hawaii with the Band, and in 2013 was honoured to perform at Gallipoli and Ankara in Turkey as part of the ANZAC Day commemorations.

Cathy is also a keen chamber music player and has been a member of the New South Wales Chamber Music Society for many years.  Cathy does voluntary work for the Society assisting in managing its extensive music library and organising a series of concerts at Sydney’s historic Independent Theatre.  Cathy enjoys offering elegant and tasteful music programs for weddings, ceremonies and other functions.  In the past Cathy has also been Secretary of both the Australian and the New South Wales Flute Societies.

Cathy holds the Fellowship Diploma of Trinity College London, and an AMEB Associate Diploma in Flute Performance, as well as a Master of Music Degree specialising in Instrumental Pedagogy from the University of New South Wales. Cathy is accredited as a teacher of Flute, Theory and Musicianship by the Music Teachers' Association of New South Wales Cathy regularly undertakes further professional development activities, most recently completing a Graduate Certificate in Music Technology.

Cathy enjoys playing and teaching all styles of music and caters for students who want to play the flute as a hobby, as well as those who wish to prepare for AMEB, Trinity College, ANZCA and HSC exams.  Cathy encourages all students to develop performance skills in concerts and eisteddfods. Cathy's philosophy is that learning music must be an enjoyable experience resulting in a sense of achievement for students, parents and teacher.