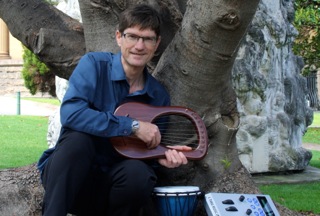 Born in New Zealand in 1961 Michael began piano studies with his grandmother and horn with his father, Hugh. Michael has held full-time positions with a number of Australian orchestras including that of Principal Horn in the Queensland Philharmonic Orchestra and Associate Principal with the Queensland Orchestra (now QSO). Michael now freelances mostly in Sydney where he is guest principal for the Australian Opera & Ballet Orchestra. He has recently been guest principal for the Australian Chamber Orchestra, the Canberra Symphony, Canberra International Music Festival, Melbourne Symphony Orchestra as well as the Australian Brandenburg Orchestra and Ludovico’s Band, the last two on natural horn. Chamber music credits include his contemporary ensemble LOCANA since 2003 and Omega Ensemble from 2013.

Teaching is an important part of his work and he has developed a tutor book Tuning the Horn: Beginnings for his students. Composition is also a significant part of his musical life having written much ensemble music along with songs and percussion works. A considerable number of his compositions include intervals from the harmonic series, extended just intonation. His music is published by Wirripang Pty Ltd (www.australiancomposers.com.au) and in 2011 he was awarded the degree of Doctor of Creative Arts from the University of Wollongong. In March 2015 Michael launched CHIME Music College (www.michaelhdixon.com) to assist adults explore the language of music.