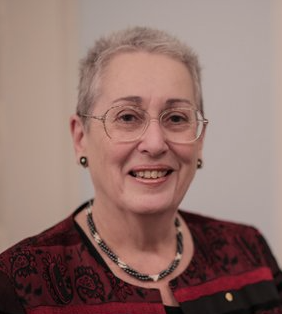 Having first joined Council in 1987 and over the years served three terms in the capacity of Vice-President, Dr Rita Crews was President of the Music Teachers’ Association from 2004 to 2019 and is still editor of The Studio journal. In 2019 she had the privilege of becoming a Patron of the Association. With some 40 years teaching experience at the private and tertiary levels, including distance education, she has been an AMEB written examiner since 1988 and is currently Chief Examiner for written subjects at both State and Federal [online] levels.

Rita was a member of the AMEB [NSW] Board from 1990 to 2017, and during that time Deputy Chairperson for 21 years. She was previously Head of Professional Development at the Australian International Conservatorium of Music where she taught research and co-ordinated the pedagogy stream of the BMus programme. For many years Rita lectured Professional Development courses for private music teachers through the University of New England and she continues to conduct similar sessions as well as workshops at the behest of various music teacher, conservatoria and examination organisations, nationally and internationally.

Apart from numerous reviews and articles in publications such as Ossia, Sounds Australian, The Studio, Piano Rendezvous, Music and the Teacher, Music in Action and the British Music Society’s Newsletter, Rita’s own publications include piano music for children, some of which appear on the AMEB syllabus; she is the author of several articles in the Oxford Companion to Australian Music; two musicology courses, Music of the Classical Era and Piano Music of the 19th Century published by the University of New England; the liner notes for the CDs The Australian Album, Anthology of the Chamber Music of Miriam Hyde, and The Songs of Miriam Hyde and the author of the Introductions and text for The Six Piano Sonatas of Roy Agnew, The Piano Miniatures of Roy Agnew and Tribute to Miriam Hyde, published by The Keys Press; her poem Uluru, published in the USA, has been set for a capella female voices and subsequently recorded.

She is the co-author with Julie Spithill of 100 Years: Music Teachers' Association of NSW 1912 to 2012 written for the Centenary of the MTA in 2012, and published by Wirripang, and she wrote the Handbooks for the AMEB No.17 Series Piano, analysing over one hundred works. She is also the author of A Centenary Celebration: the Australian Music Examinations Board 1918 to 2018 published by the AMEB for the 2018 centenary as well as Past, Present and Future: One Hundred Years of AMEB NSW 1918-2018 published by AMEB [NSW]. The series of 'Blessings' by composer Brett McKern for choir and published by Wirripang are set to her texts.  Her latest publication is A Musical Missionary: The Life and Music of Dulcie Holland co-authored with Dr Jeanell Carrigan AM published by Wirripang in 2020.

With a special interest in the history and analysis of Australian music, Rita’s honours thesis concentrated on the keyboard works of Miriam Hyde while her doctoral thesis is an exhaustive analytical study of the piano works of Roy Agnew, Dulcie Holland and Margaret Sutherland. The Masonic music of Mozart is also a particular field of interest and she often lectures on this topic.

Rita is a member of many professional organisations and her biography appears in several international dictionaries including the Dictionary of International Biography (from 23rd edition) The World's Who's Who of Women (from 12th edition), and The World’s Who’s Who of Business and Professional Women (from 3rd edition). She is also included in the 2008 inaugural Who’s Who in NSW and the 2017 edition of Who's Who of Australian Women. In 1992-93 the Cambridge Biographical Centre honoured her with the award of International Woman of the Year for services to music education. In 2002, she was created a Fellow of the Australian Society of Musicology and Composition for her contribution to Australian music and composers. In 2014 she was honoured with the award of the Medal of the Order of Australia [OAM] for "services to the Performing Arts as a music teacher, examiner and composer". In 2015, she received the Distinguished Alumni Award from the University of New England for a "distinguished career in music education and long-standing connections with student and teacher musicians."

Since a teenager, Rita has been involved in, and committed to, various avenues of community work but for recreation, she plays the drums, has travelled thousands of kilometres in the outback and indulges her life-long interest in astronomy.